Live Chat with our experts

Find your dream team
Previous Next

Hard-to-fill positions rose substantially in April and the trend continued throughout May, in line with the shortage of workers and tight labour market situation recently reported by REC. According to Job Market Insights’ combined data from all major job boards and employment websites, there has been a 51% growth month-on-month in vacancies that have proved challenging to fill with qualified candidates since April. On the other hand, unique job ads have stabilised at historically high numbers with a slight drop in April (even December’s seasonal decline represented 40% more job ads YoY). Based on Job Market Insights methodology, hard-to-fill positions are unique vacancies being posted on paid sites multiple times with periods of at least two weeks in-between.

By job category, Health, IT & Telecomm, Hospitality & Catering, Administration, and Construction & Real Estate ranked as the most in-demand since January this year. The categories that had the greatest gains compared to the last five months of 2021 were Education (+24%), Finance (+17%), Consultancy (+17%) and Marketing & Media (+15%). In sharp contrast, the biggest fallers were in Logistics (-18%) and Management (-21%). 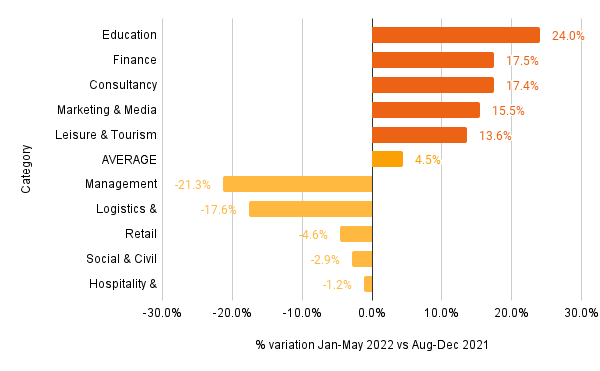 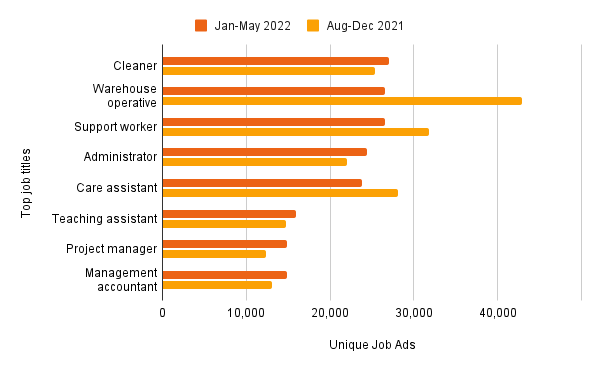 The percentage of permanent vacancies was at a two-year high in April and May, reaching 80% of job postings. Advertised salaries increased in the middle band since the beginning of the year while the lower range decreased.

Care assistant, customer service and support worker remained among the most difficult to fill positions. As the pressure on the Health sector eases, nurse jobs drop out of the top-10 hard-to-fill positions for the first time after two years. On the other hand, cleaner, delivery driver and sales assistant are on the rise.

At the job category level, Health and Logistics have lost ground since April while Hospitality & Catering, Customer Service, and Retail have seen an increase in demand.

It is worth noting that offered salaries are lower than the market average—most of them in the range below £40,000. This suggests that it is becoming increasingly difficult to find candidates for the lower salary ranges. If the shortage continues, this could lead to more pressure to increase starting salaries.

Identifying which positions, sectors and companies find it most difficult to recruit talent is essential in the current context. Job Market Insights makes it possible to cross-reference different variables to refine the results and find unattended opportunities. These ‘hot leads’ help recruiters accelerate candidate placement and accurately identify potential customers.

As a result of the increasing difficulty in recruiting new labour, inflation and the rising cost of living, several datasets have shown that initial wages have gone up. Job Market Insights’ data, based on job ads, reveals that the salary offered in the range between £20,000 and £40,000 grew the most in the first four months of 2022. This band reached almost 50% in this period compared to 45% the year before. While jobs with salaries below £20,000 dropped to 26% vs. 32% in the previous period.

The tightening of the labour market is not only pushing wages up but there is also a trend toward permanent hiring. Among vacancies that reported the contract type, permanent positions reached 80% in April and May 2022, a 24-month high. Temporary jobs fell to 9%.

Legal, Sales and HR are the categories that offer a higher number of permanent positions. At the other end of the spectrum we find Education, Construction and Logistics. For example, permanent jobs in Education, by comparison, only account for 62% of all adverts, while temp jobs represent 22%.

Start chatting now!
Start chatting now!
What can we help you with today?
End chat
Connecting...
None of our operators are available at the moment. Please, leave a message or try again later.
Sadly, our operators are unavailable. Please, try again later.
Have a question? Need some help? Chat to one of our experts now!
This chat session has ended
Was this conversation useful? Vote this chat session. Good Bad